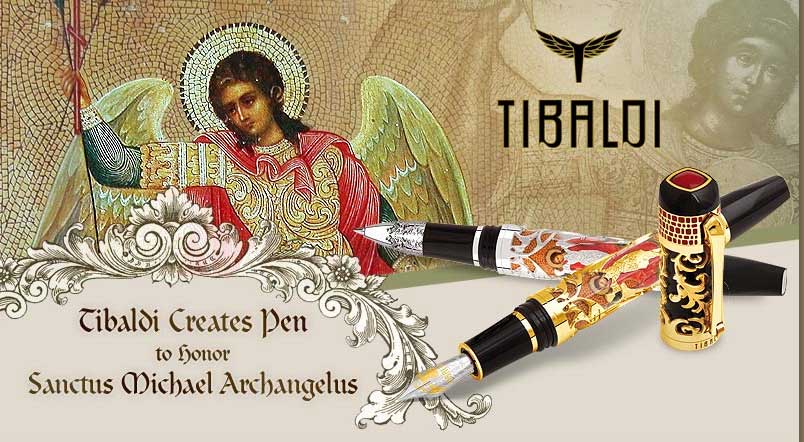 Tibaldi Sanctus Michael Archangelus Pens capture the essence of one of the most venerated saints in most major religions. 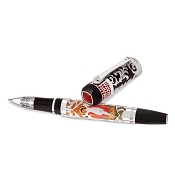 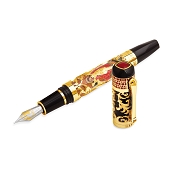 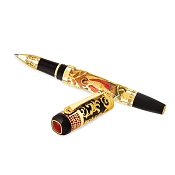 From passages in Scripture, to modern films and graphic novels, Saint Michael is the embodiment of God’s warrior. Saint Michael appears throughout the world’s holy works both by name or by inference as supporting the defenseless and the captive; he is a Champion and the rescuer of the souls of the faithful.

All major religions recognize Saint Michael as a force for righteousness and goodness. He was a healer, a physician, a protector.

A source of inspiration for countless painters, Saint Michael is typically depicted as winged and with an unsheathed sword. Portrayed as young and strong in magnificent armor, he is often seen in combat with a dragon or standing upon the vanquished Satan. It is this image that captures the essence of Saint Michael, and it is the image that adorns the pen fashioned in his honor by Tibaldi.

Tibaldi’s source is the stunningly beautiful icon created by a master from Palekh, who was influenced by the Russian modernist style. Adapted for the pen by Tibaldi’s talented artist, Lorena Straffi, the Archangel appears on a gold background with texture and detail simulating a mosaic. Hand-painted by Straffi, Saint Michael tramples underfoot a devil, represented as a young man reclining on the grassy ground decorated with narcissuses. In his right hand, Michael holds a cross, a spear and a criterion; in his left, he carries the lowered sword in the patterned sheath.

Tibaldi’s designers have wrapped this image around the pen’s barrel, creating its details in relief. The Archangel’s wings, body and armor are reproduced in precious metal, hand-engraved and perforated to show the colors of a classic icon through the apertures. The image is also engraved on the 18k solid gold, part-rhodium-plated nib, with the angel’s wings and armor highlighted in 18k yellow gold.

Released a limited edition of 324 pens each in silver (fountain pen and roller ball); the number represents the earliest reference to Saint Michael in the Old Testament. It will also be made available in a series of 50 pens of each for the gold edition (fountain pen and roller ball), to represent the 50 angels in Christian and Islamic tradition. All pen trims are produced in either sterling silver or solid gold and the pen body is in resin.