The Da Vinci Code limited edition pen by TIBALDI is an opulent, precious work of art, whose mechanical reliability and precision reflect that of luxurious timepieces. Brimming with intrigue, it is adorned with high precision engravings of Leonardo da Vinci's iconic Vetruvian Man, multiple locations from the movie (St. Sulpice Cathedral, the Eiffel Tower, the Arche de Triomphe and the Parthenon) and a series of cryptic codes and symbols including a five pointed star, phi and fleur de lis. Deciphering the letters and symbols, which decorate the pen?s cap, reveals the words which, in the story, enable the cryptex to be opened. The beautifully etched 18K gold nib features The Da Vinci Code (DVC) official movie logo. 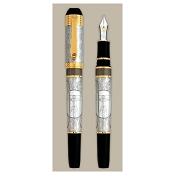 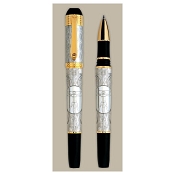 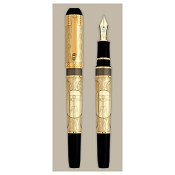 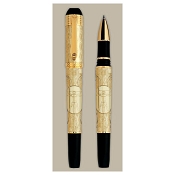 Phi, the concept known as the Divine Proportion, has been invoked in every aspect of the design and development of The Da Vinci Code pen's components. The golden number (1.618) is present in each and every part of its awesome structure. For example, the proportion between the pen's cap and the visible portion of the barrel when the pen is closed is 1.618. Even the exclusive pen's accompanying case - a reproduction of the movie's cryptex box, a guardian of ancient secrets ? is measured in multiples of the phi coefficient. Phi has been used in art, architecture and music for centuries, often unintentionally. It also occurs constantly in nature. It was first recognized when the 13th century mathematician Fibonacci discovered an extraordinary mathematical sequence, where each number equals the sum of the two previous numbers. This became known as the Fibonacci numbers and in the 18th century, a further mathematical relationship between the numbers was discovered. Every number is approximately 1.618 times larger than the number that precedes it. In The Da Vinci Code, phi unlocks the code to understanding a critical message.

The Tibaldi Da Vinci Code pens are produced as a numbered limited edition, reflecting the divine proportion and the phi coefficient according to which they have been meticulously designed and constructed.

All the precious metal components are produced and galvanized in Switzerland, the country responsible for producing the world's finest watches. Each part is inspected and hallmarked by the Swiss Federal Customs Office for the Control of Precious Metals in Geneva, a guarantee of the origin and high quality of the materials and finish. The Swiss hallmark is the only procedure of its type recognized all over the world.

Designed to be immediately recognizable as TIBALDI, the ornament is one of the distinctive features of the pen. Richly engraved with the suggestive symbol of the rose (embedded into a silver/gold frame), also characterizing the lid of the cryptex box. With a square section at the top, gradually tapering to the round ring at its base.

The tie-shaped clip is reminiscent of TIBALDI pens from the early 1900s, but its sophisticated snap mechanism and roller make it easier to insert into a pocket. Thanks to extensive engineering research and laboratory testing, the clip is mounted on the ring, decorated with diamond point Clou de Paris, rather than on the cap. The clip as well as every other element is carved with the help of advanced computer-operated lathe and milling machines.

The Da Vinci Code's striking nib is solid 18K gold, partially rhodium plated and engraved with the movie's official logo (DVC). Rhodium is only applied outside the contours of the logo, requiring the skill of an experienced goldsmith. The iridium point is welded to the gold and shaped according to the writing grade desired. Like the original TIBALDI nibs from the early twentieth century, each nib is engraved with the guarantee of first-class writing quality, “1a Qualità”. The thickness of gold varies across the nib to maximize flexibility and thereby the writer's comfort.

The Clou de Paris, consisting of repeating pyramid patterns, is an ancient decorative design, existing since the 16th century. In the 18th century, it was introduced into the watch industry as an elegant way to hide scratches and extend the life of metal surfaces. Each face of the pyramid is processed on two axes, resulting in a design with a high visual impact resembling a diamond shape and similarly reflecting the light. The work is extremely difficult and requires high-precision technology and instruments.

The name most likely comes from the basalt stones used to pave Parisian cobblestone streets.

The mechanical precision and reliability of TIBALDI's innovative filling system resembles the winding mechanism of a high quality watch. An international patent (MI2005U 000449 - Fountain pen with "perfected" filling mechanism) has been secured for this unique filling mechanism. The cursor for producing the snap rotation runs along a toothed surface.

The number of teeth of the bushing, 32, is a multiple of phi, 1.618. Rotating the blind cap, when filling the pen, has the same sound and feel as manually winding a watch crown. What's more, the mechanism applies a slight resistance to rotation, avoiding brusque movements at the bottom of the pen reducing the risk of accidental leakage.

The ink level may be checked via a transparent window on the barrel. The unique filling mechanism has a tank that holds a generous amount of ink (0.9 ml).