With the Sacred Military Constantinian Order of Saint George Limited Edition Pen, Tibaldi inaugurates the trilogy fine writing instruments celebrating the chivalry world. The Order of Saint George was founded in 1190, with the objective of promoting the profession of faith, the defense of Roman Church, and the intensive activity of welfare and humanitarian support. The Knights of the Order swore to live in faith and charity: the two original virtues. 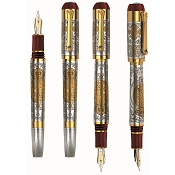 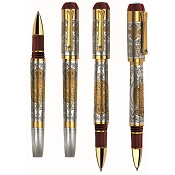 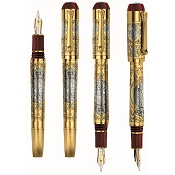 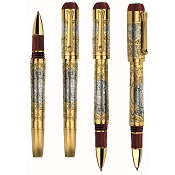 The Sacer Militaris Ordo Constantiniani Sancti Georgii pen by TIBALDI is a precious work of art, born from an idea of designer, Maurizio Cavazzuti. Each pen is finely etched by hand, with the symbols associated with the Order, the Constantinian cross and the coat-of-arms of the Royal House of Bourbons and the Kingdom of the two Sicilies. The burgundy resin trims, evoking the heraldic colours of the Order, blend with precious metals like gold and silver and contrast nicely with the light blue amazonite stone adorning the cap's ornament.

Phi, the concept known as the Divine Proportion, has been invoked in every aspect of the design and development of the Constantinian Order of Saint George pen's components. The golden number (1.618) is present in each and every part of its awesome structure. For example, the proportion between the pen's cap and the visible portion of the barrel when the pen is closed is 1.618. Phi has been used in art, architecture and music for centuries, often unintentionally. It also occurs constantly in nature.

The non-metallic trim of cap and barrel, and the internal structure of the pen consist of the finest stress-free resin. Carved from a single bar of raw material, thickness is consistent, guaranteeing the durability of the components.

Tibaldi's Sacer Militaris Ordo Constantiniani Sancti Georgii writing instruments are produced as a numbered limited edition of 230 fountain pens and 230 roller balls in sterling silver with gold accents, a symbolic number chosen to celebrate not only the day of foundation of the Order, i.e. April 23rd, but also because on this day the memory of Saint Gorge is celebrated. And to commemorate the 20th Centenary from the foundation of the order, recurring in 2007, Tibaldi offers a solid gold version of only 20 fountain pens and 20 roller balls.

Designed to be immediately recognizable as TIBALDI, the ornament is one of the distinctive features of the pen, crowned with a pyramid-cut amazonite.

The tie-shaped clip is reminiscent of TIBALDI pens from the early 1900s, but its sophisticated snap mechanism and roller make it easier to insert into a pocket. Thanks to extensive engineering research and laboratory testing, the clip is mounted on the ring, rather than on the cap. The clip as well as every other element is carved with the help of advanced computer-operated lathe and milling machines.

The Sacer Militaris Ordo Constantiniani Sancti Georgii's striking nib is rhodium and yellow gold and engraved with the image of the Constantinian cross. Rhodium is only applied outside the contours of the cross and inside the words, requiring the skill of an experienced goldsmith. The iridium point is welded to the gold and shaped according to the writing grade desired. Like the original Tibaldi nibs from the early twentieth century, each nib is engraved with the guarantee of first-class writing quality, "1a Qualità". The thickness of gold varies across the nib to maximize flexibility and thereby the writer's comfort. Writing grades available are: Fine (F) and Medium (M).

The mechanical precision and reliability of TIBALDI's innovative filling system resembles the winding mechanism of a high quality watch. An international patent (MI2005U 000449 - Fountain pen with "perfected" filling mechanism), has been secured for this unique filling mechanism. The cursor for producing the snap rotation runs along a toothed surface. The number of teeth of the bushing, 32, is a multiple of phi, 1.618. Rotating the blind cap, when filling the pen, has the same sound and feel as manually winding a watch crown. What's more, the mechanism applies a slight resistance to rotation, avoiding brusque movements at the bottom of the pen reducing the risk of accidental leakage. The unique filling mechanism has a tank that holds a generous amount of ink (0.9 ml).

The unique filling mechanism has a tank that holds a generous amount of ink (0.9 ml). A pen with a Medium nib, for example, writes approximately 486 meters per fill.