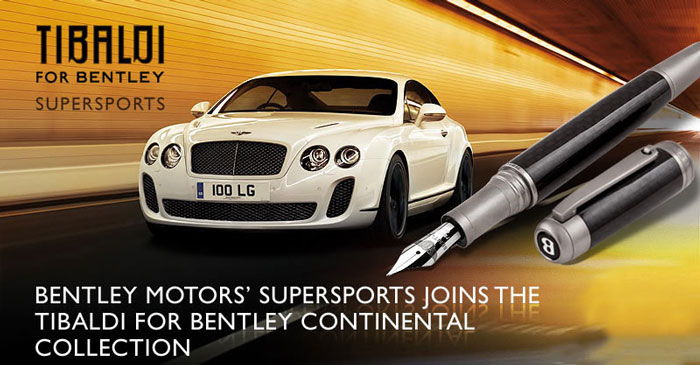 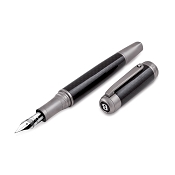 Every Bentley motorcar is a statement. With the Continental Supersports, the revered English marque demonstrates that limitless performance, peerless comfort, and sublime elegance are compatible with a changing world. To define a supercar for the 21st Century, embodying all of Bentley's traditional values but honed to accommodate modern needs, the Continental Supersports' designers exploited the limits of aerodynamics, employed radical new materials, banished excess weight, and even adapted the powertrain to work its magic with FlexFuel. The result has been described by the manufacturer as "the most extreme Bentley ever."

Long established as a delightful adjunct to Bentley ownership, The TIBALDI FOR BENTLEY SUPERSPORTS collection has its own tradition to follow, with every fountain pen and roller ball from the respected Italian pen crafter sharing materials and aesthetic details consistent with the vehicles they symbolise. As acknowledged by Giuseppe Aquila, CEO of Tibaldi, "The close collaboration between our engineers and Bentley's design team of Robin Page, head of Interior Design, and Jonathan Punter, resulted in the creation of an outstanding pen, which encapsulates the features of Bentley's most powerful car ever."

As interpreted by Tibaldi, the TIBALDI FOR BENTLEY SUPERSPORTS pens lose nothing in translation. To represent the spirit and soul of the Continental Supersports, Tibaldi has developed a series of writing instruments that speaks in the design language of the vehicle itself. Each pen features Tibaldi's unique pocket clip terminated in a rolling ball. And every writing instrument adheres to Tibaldi's respect for the Divine Proportion, the ratio between the pen's cap and the visible portion of the barrel when the pen is closed, equaling the ratio of 1.618.

For the Supersports pen to voice instantly its extreme functionality and purpose, Tibaldi's designers turned to carbon fibre – the material most evocative of modern technology – with solid titanium trims. Materials such as these enable the Supersports to be both lighter and stronger; every time an owner raises a TIBALDI FOR BENTLEY SUPERSPORTS pen, that sensation will be recalled. Addressing the exclusivity of the actual car, the TIBALDI FOR BENTLEY SUPERSPORTS will be limited to 630 fountain pens and 630 roller balls. The number of pieces manufactured corresponds with the horsepower of the actual vehicle.