Award winning British designer goldsmith, Jack Row, designs and creates elegant writing instruments and accessories. Working exclusively in Gold, Silver and Platinum, and utilizing precious gemstones including diamonds and sapphires, the virtuoso designer skilfully unites traditional goldsmith skills with the latest technology to craft beautiful artifacts that are as much objets d'art, as they are fine jewellery and writing instruments.

"As a British craftsperson and designer, my foremost aim is to produce innovative, beautiful and extraordinary products, which are of the uppermost quality in both materials and design. I take great pride in the knowledge that the pieces I design and make will be valued as works of art, as much as functional items, to be passed down from generation to generation." 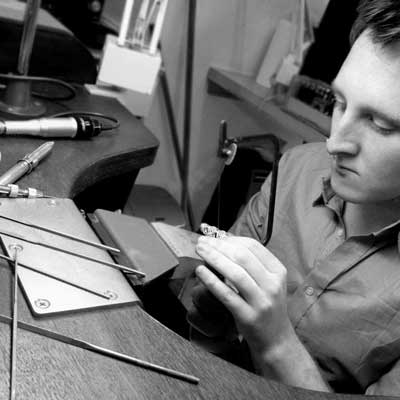 Each pen is painstakingly produced utilizing a combination of traditional techniques usually reserved for the creation of high-end fine jewellery alongside cutting edge technological processes employed in the fabrication of precision instruments. This careful blending of methodologies enables the creation of forms in precious metals which are innovative, yet of the uppermost quality.

Whilst the finishing, setting and polishing of the pens employ the traditional hand skills of the goldsmith and the master stone-setter, the design and fabrication of the intricate filigree casings utilises the latest technologies of computer aided design and stereolithography rapid prototyping.

Jack was born in Nottingham, England in 1985. An interest in art, design and technology developed from an early age, and he knew his career lay within the creative arts. After completing an apprenticeship in traditional goldsmithing, he began studying in 2005 at the Birmingham Institute of Art and Design (BIAD) on a Higher National Diploma (HND) jewellery/silversmithing design course. Following successful graduation in 2007 and winning a number of awards, he entered employment for one of Europe's leading jewellery manufacturing companies, as a designer of bespoke products. Experimenting with the application of computer aided design (CAD) technology, Jack became fascinated with its potential for the creation of innovative, exciting products.

Returning to study at the Birmingham Institute of Art and Design (BIAD) in 2008, he began to combine his traditional skills learned as an apprentice, with the innovative application of CAD and RP (Rapid-Prototyping) technologies. Graduating with a First-Class Honours degree a year later, Jack won the coveted British Jewellers Association prize for his precious metal fountain pen design concept. Six months later, he was awarded a Gold Medal prize by the Worshipful Company of Goldsmiths, one of the established Livery companies of London, for his 'Architect' prototype fountain pen, in sterling silver, based upon the original design concept.

Jack currently designs and crafts his writing instruments and accessories in his studio, based in the heart of Birmingham's historic Jewellery Quarter. Jack is also a visiting lecturer at Birmingham City University, giving seminars to design students on a range of academic and vocational courses.